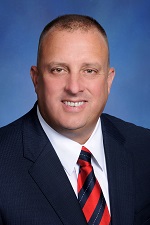 Mark Racicot is a seasoned and respected healthcare executive. He has been with Tenet for approximately seven years.

Since becoming CEO in 2018, he served as Chief Operating Officer at Palmetto General Hospital where he oversaw the design and construction of the hospital’s new 31-bed clinical decision unit. He also managed a variety of projects including a new CT unit and MRI replacement in the imaging department and telemetry system upgrades on three nursing units. A known relationship builder, he was also responsible for leading ancillary and support teams to significantly improve throughput and patient experience.

Mark also served as the COO group lead of Broward and Miami-Dade where he implemented processes to improve standardization and efficiency across the five hospitals. He also helped create a regional capital plan to refurbish patient rooms over a three year period across the ten hospitals in Florida.

Previously, Mark served in various operational and strategy leadership roles at MetroWest Medical Center in Massachusetts for an additional four years before the hospital was acquired by Tenet. Additionally, he was the sole administrative team member assigned to manage daily operations of a secondary campus.

Prior to that, he served as Director of Facilities at Memorial Hospital of Rhode Island, Pawtucket, RI.