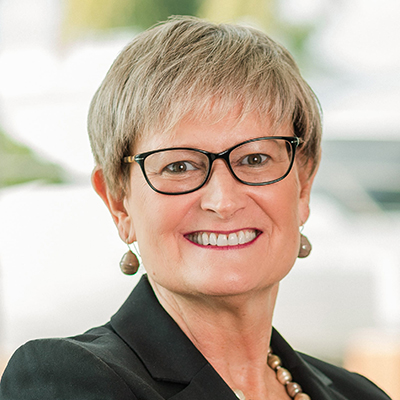 American National Bank is proud to be one of the few locally owned community banks in Broward County serving South Florida since 1985.  Ginger Martin has been with the bank 20 of those years.

Ms. Martin’s passion for fighting against human trafficking has led her on a mountain climbing journey with The Freedom Challenge since 2014.  With three climbs under her belt thus far, including a noteworthy climb of Mt. Kilimanjaro, Africa in 2015, Ms. Martin has tirelessly raised funds and awareness for the women and children who are victims of human trafficking.  Ms. Martin will be undertaking two more climbs in 2017 including Estes Park, Colorado and Machu Picchu, Peru.

Under her leadership, the bank has received numerous awards for its financial performance and community involvement, such as the 2016 Banky Award from The Institute for Extraordinary Banking, Business of the Year Award from South Florida Business Journal, and Small Business of the Year from the Greater Fort Lauderdale Chamber of Commerce. The Commonwealth Institute named the bank one of the “Top 50 Women Led Businesses” in the state of Florida in 2017, 2016 & 2015.

In addition, Ms. Martin has been personally honored for her business leadership with awards such as 2015 Laureate by Junior Achievement Business Hall of Fame, Profiles in Leadership Honoree by Leadership Broward, and Influential Business Women by South Florida Business Journal.

Ms. Martin currently serves on the boards of The Executives’ Association of Fort Lauderdale, Extraordinary Women Leading Change, and Taylor’s Closet.  She has previously served on the boards of the Florida Bankers Association, Leadership Broward Foundation, and as a former foster parent she served on the board of 4Kids of South Florida, Inc. Ms. Martin is a member of Junior Achievement’s Circle of Wise Women, PACE Center for Girls’ PACESetters, Strikeforce 421 Women’s Giving Circle, International Women’s Forum of Florida, and United Way of Broward County’s Women United.